My Favorite Books on "The Big Screen"

May 05, 2010
A few months ago we read Dear John for the Carlson High School Book of the Month Club.  We discussed the novel the same month the film version was released and wow, so many of our readers were disappointed with the film.  This sent me thinking about my favorite books that have made their way onto the big screen.  So many films start off as plays and novels.  Of course it is much easier to take a novel, and change it into a screenplay for a film than to create a screenplay from scratch.  It is even easier to take a play and put it onto the big screen.  I will share my top five reads that have found their way onto the big screen for you.  Note I am ranking the literary work, not the film (films usually do great books little, to no justice).

Along Came a Spider, by James Patterson....I love the Alex Cross novels.  They are great summer reads. Very quick chapters with an exciting story line.  I have read many of the "Cross" works, but it has been a few years since my last attempt.  I will admit, I am a huge Morgan Freeman fan as well!

Red Dragon by Thomas Harris.  Of course, Harris is probably best known for writing The Scilence of the Lambs, however I found Red Dragon to be a much better literary work.  I still recall reading this book relaxing on the sand in Myrtle Beach years ago.....book memory burn.  The book was so good, they actually made two movie versions: Man Hunter released in 1986 and Red Dragon in 2002.

Of Mice and Men by John Steinbeck.  I have to admit, I am a huge Steinbeck fan.  I loved teaching Of Mice and Men when I was teaching English 10 years ago.  Such a great story (there are very few classic novels that teenagers are be interested in, and this is one of them).  Such a great, yet tragic story about friendship.  I will state, this trailer is actually a project a student completed for an English class and not an official trailer, very well done however.


I first read F. Scott Fitzgerald's The Great Gatsby as a junior in high school and fell in love with the work instantly.  I find myself re-reading this book about once every three years.  It is just a great summer read, takes me away and I day dream about living life as one Jay Gatsby.  A great life for sure, (until the end of the novel).  I know there is a newer film version, but I still prefer the classic Robert Redford version from 1974 (however nothing comes close to topping the novel!) 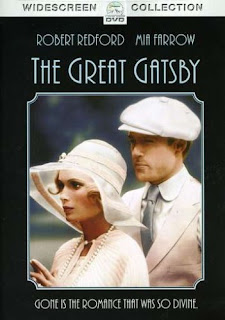 Number one on my list, well when it comes to number one it is both a play and film that I love, Cat on a Hot Tin Roof by great American playwright Tennessee Williams.  Wow, what a play and what a film (although the film tends to avoid the crucial "character fault" of main character Brick.)  It is clear that Williams did not appreciate that there is little to no mention of homosexuality and Brick's character in the film version.  I must assume that back in 1958 homosexuality was much more of a taboo subject than it is today.  Still I love both the play and film.  Burl Ives, Paul Newman and Elizabeth Taylor (WOW) in her prime make a great combination.

I love reading all of these works, so I found myself liking most of the film versions.  I find myself enjoying the Ed Norton Red Dragon a little more than the William Petersen Man Hunter.  I still think when it comes down to it, all of the books/plays were much better than the film  A movie can never capture everything that is in a book (the movie would have to be six hours long or so).  Plus, reading allows you the freedom to come to conclusions on your own, not have them forced down your throat.  So, which of your favorite reads have hit the big screen?  Have you been generally satisfied or disappointed when leaving the theater?  Wow, and how can we have a book/movie blog post without a "Harry Potter" sighting?  Well, that is simple, while I love the Potter films, I have still yet to read any of the Potter works.  I know, what kind of librarian am I?

April 22, 2012
Back in November I wrote about what I believe to be the best part of my job; running into Carlson High School graduates that are success stories and hearing about how well they are doing in the "real world."  Carlson High School graduate Nathan Matatall is clearly one of these success stories.  After graduating from Carlson High School and Michigan State University Nathan has gone on to very successful career at Dell Computers.  The News Herald even published a feature piece on Nathan a few years ago.  This past week, Nathan provided my family with a once-in-a-lifetime experience that I will never forget.   Nathan, my former public speaking student, contacted me via email a few weeks ago and inquired about taking my kids on a tour of Marine One (one of the helicopters used to transport The President of the United States and other dignitaries) and to possibly attend the landing of Air Force One when President Obama was scheduled to arrive in Detroit.  I was very excited a
11 comments
Read more