January 09, 2011
Before becoming a parent I never really thought much about safety features when buying a car.  The salesperson would mention airbags or anti-lock breaks, but I was always more concerned with the size of the engine, or what kind of gadgets I can add as extras.  Once I became a parent I started to take a little more notice of things like latch restraints and side curtain airbags, but they still were not that important to me.  Thankfully my wife would always take notice of the safety features as I tried to determine what kind of options I should add to the interior.  Well, something happened last week that changed my life and outlook on automobile safety forever.

Last Tuesday started like any normal day.  It was going to be my second day back from winter break, and I was looking forward to preparing the Carlson High School Library for the new calendar year.  I was just about to leave for work and my mother-in-law asked if I would take her car and she could keep mine (her car only has one car seat, while mine has two).  I was in a hurry, so I did not put up much of a fight.  Looking back I am so thankful I switched cars.

After returning from lunch I received one of those phone calls no parent ever wants to receive.  My mother-in-law left a message on my office phone that she had been in an automobile accident.  My son, Nate was in the car at the time and they were being transported to a local hospital.  I ran to my boss to inform him that I had to leave and get to the hospital.  He was very understanding and I made my way to the emergency room.  I actually drove near the scene of the accident to arrive at the hospital.  I was in agony waiting to hear if everyone was safe.  The staff of the hospital informed me that nobody was allowed in the trauma center, and since this was a high-speed accident everyone had to be checked out by the trauma team.  A Brownstown Township fireman came and re-assured me that everyone was fine and I would be able to see my son and mother-in-law shortly.  My dad and wife arrived to join me in the waiting room.  Thankfully, after what seemed like a hour, we were allowed back.  My son was fine, just scared.  My mother-in-law was a little banged up, but nothing serious.  I was so thankful.

My car was hit by another vehicle traveling at nearly sixty miles per hour.  I was not able to see the damage until Friday when I went to the impound lot since the car was being "totaled" by the insurance company. 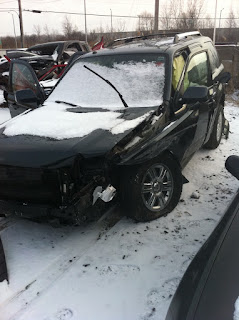 When I saw the damage I could not believe there were not more serious injuries.  The insurance adjuster commented that if it were an older car, someone could have died (note, my mother-in-law's car is about ten years older than mine, so you can see why I am glad we traded that morning).  The front, side-curtain, and seat airbags kept everyone safe.  My son did not even have a scratch.  It turns out my wife knew what she was doing when she selected a Mercury Mariner back in 2008 when we leased this car (and when selecting car seats).  The Mariner is one of the safest sports utility vehicles on the road.  Let me just say, car safety has come a very long way in the past ten years!  Now that the car is totaled I am new car shopping, and you can guarantee that safety/collision ratings are very high on my list of features.  When you have little ones, a sweet sound system or exotic color just do not seem so important anymore.

A final note, the Brownstown Township Fire Department was wonderful during this traumatic time.  They took excellent care of my son, who was very scared after the accident.  When Nate was wheeled out of the trauma unit, a group of five to six firemen where all waiting to ask how he was doing.  In this area of "tax payer angst" I can say I am happy my tax dollars are paying the salaries of these outstanding civil servants.  Just remember when complaining about your tax bill, you do get what you pay for.  Thank you too all of the Brownstown Fireman that responded to the accident, you treated my son like he was your own!

April 22, 2012
Back in November I wrote about what I believe to be the best part of my job; running into Carlson High School graduates that are success stories and hearing about how well they are doing in the "real world."  Carlson High School graduate Nathan Matatall is clearly one of these success stories.  After graduating from Carlson High School and Michigan State University Nathan has gone on to very successful career at Dell Computers.  The News Herald even published a feature piece on Nathan a few years ago.  This past week, Nathan provided my family with a once-in-a-lifetime experience that I will never forget.   Nathan, my former public speaking student, contacted me via email a few weeks ago and inquired about taking my kids on a tour of Marine One (one of the helicopters used to transport The President of the United States and other dignitaries) and to possibly attend the landing of Air Force One when President Obama was scheduled to arrive in Detroit.  I was very excited a
12 comments
Read more